WOW!!! I didn't realize it had been so long since I wrote. My life has been so hectic. My daughter has moved into her own apartment with the two boys, and my son has moved in instead with his little girl, who's 4. In a couple of weeks I think we'll have his other two, also, who are 10 and eleven. My husband and I were looking forward to having some time to ourselves, but that's not gonna happen! We could even use a bigger house! Life just never seems to follow the plans we lay out for it, does it? At least not for me. Oh well, it will give a chance to get to know these grandchildren better. The two oldest have been living with their mother in Tennessee, and the little one has been with her mother in Arizona, so we haven't gotten to see them very much lately. And we will still have the two boys for two days and nights a week, so our house will be rather busy.

I have also been busy trying to get another book written. I've got the drawings done, I think, and now I just have to type it all up together. This will be number one in the kid's crafts series. Now if I just knew what to do to get them published. There's a small publisher here in town, but they don't do children's books and they don't do craft-type books. That's what they told me. I gave a copy of the first book to the head librarian at the public library, and she said she really liked it. She led me to a big fat book (that I have no time to read) about how to get published, but it will be a while before I get around to it.

I have been busy, too, with helping to get the plans laid out for the year for the library story time. I am a volunteer for that program, and I really enjoy it. We read and tell stories, do activities and crafts, and have snacks. We did a Jackson Pollock painting a couple of weeks ago, and you should have seen the kids flinging that paint on that paper! They had a ball, and so did all of us adults. We all wound up with paint on us, but it was worth it, and it was only tempera paint, so it washed out. Sandie, who is in charge of Story Time, even wound up with purple paint in her hair! Last week we dedicated the whole day to Dr. Suess, and I wrote a poem in as Dr.-esque style as I could. Here it is:

There's a grouch on my couch.
He just walked in my door
And I really don't want him
Around anymore!
He grumps about this
And he gripes about that,
And he even complained
About the name of my cat!
He sits around eating
My cookies and chips,
And he ate up my veggies
And all of my dips!
He's rude and he's selfish
Like an old crocodile,
And he needs a new comb!
(Or a different hairstyle.)
I'm going to talk to him,
Tell him to go.
Tell him to leave here
And don't make it slow!
I don't like this grouch.
I just want him to leave.
Oh, wait, I forgot........
He's just make-believe!

I drew couches and some sample grouches and they colored them and cut them out and glued their grouches on the couches. They had a lot of fun, and it was the first time any of my writing has been public. It was kind of fun, even if it was only at Story Time! The next week we wrote a group poem about a ghost and a pumpkin, and then I wrote a companion poem to go with it. It was a lot of fun, and the kids love doing that sort of thing.

Now I'm trying to get the Christmas gifts going. I have a few done, and a few bought, but many more to go. I am making library pocket books for the ladies at the library, none of whom even know I have a blog, so I know I'm not giving anything away by writing this here. I am making ABC books for some on the grandkids, a game for Hal, a coloring bag for Hannah, and I'm not sure about the rest of them. The two oldest will get gift cards, I think, even though I hate the thoughts of that, but I don't know what to get them! And I need to send a nice care package to my oldest son, who just moved to Glendale, Arizona, to go to school. He knows no one there and doesn't start classes until Monday, and I'm sure after he starts classes he'll make some friends, but the holidays will be lonely, so I want to send him some cookies and fudge, things he likes. Maybe a magazine or two, some socks.....you know, kind of like what he would get in his Christmas stocking. I better get busy if I'm going to get it done, huh?

Well, I better go and get busy now. Too much to do and too little time. I will try to post more often, and not let so much time go by. Here is something I read a while back that I think is great: Live simply, love seriously, care deeply, speak kindly; leave the rest to God. Later, Gramma G.
Posted by GrammaG20 at 9:46 PM No comments: 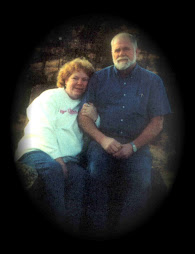